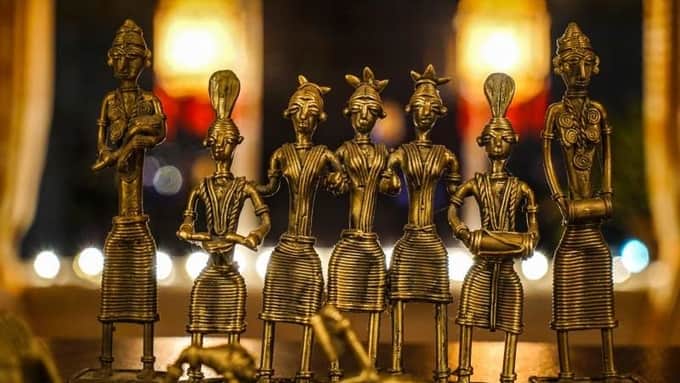 What is Dhokra Art?

Dhokra art/dokra art is a traditional technique of making metal artefacts. Practised by Dhokra Damar tribes, the traditional metal smiths of West Bengal, this art form has withstood the test of time. It is characterised by thin statues with pointed features.

This tribal art form dates back 5,000 years. The state of West Bengal boasts of five clusters of Dhokra in Hazaribagh, Khunti, Singhbhum East, Ramgarh and Dumka districts. Bundu area is also home to some artisans producing this craft.

Artisans practising Dhokra/Dokra art are also present in the states of Madhya Pradesh, Bihar and Odisha.

Artisans create beautiful metal figurines from bronze and copper based alloys using a ‘lost wax casting’. A single piece goes through a number of processes and hence takes up to a month or two to get finished.

Here’s how the first step goes. Craftsmen first create a core (a bit smaller than the desired artefact) using clay, which is coated with wax once it has dried up in the sunlight. Craftsmen ensure that all the intricacies related to design are carved onto this clay layer. Later, they add a lot more layers of clay to solidify the mould. Subsequently, they heat up the layers so that the wax layer gets melted.

Once the wax has been melted off, the molten metal is poured into the cavity via multiple channels. The idea is to let it take the shape of the clay mould. After the cooling down of the metal, what is revealed is the metal artefact is revealed (once the clay mould is broken off into equal pieces).

Finally, patina is applied to the metal object to accentuate the surface by creating colour. A final coat of wax ensures the patina is preserved for future use.

Taking inspiration from nature, artisans make use of different motifs such as human figurines, animal figurines such as elephants, turtles and various gods and goddesses as well.