All About Warli Painting and Shops in India - Shopkhoj 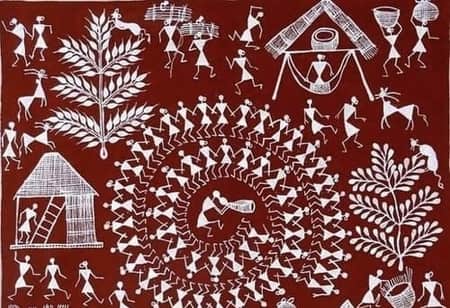 What is Warli Painting?

A lovely folk art of Maharashtra, Warli painting is synonymous with the Warli tribe who hail from the North Sahyadri Range in India. For these simple yet beautiful wall paintings, the tribes use three basic geometric shapes: a circle, a triangle, and a square. Typically, nature and its elements are portrayed in Warli paintings. Others include wedding rituals, hunting scenes and funeral scenes, among others.

Using red ochre walls as the background for their work of art, Warli artists portray intricate patterns in white

A Look at the History

The Warli tribe is believed to be the largest tribe from Palghar District of Maharashtra. It is located on the northern outskirts of Mumbai. Warli paintings have existed since the 10th century A.D. but they gained recognition only in the 1970s.

Farming is the main occupation for the Warli tribe. One may not find any influence of the contemporary culture on Warli paintings as the tribe has deep reverence for mother nature and wildlife.

Rice paste, gum and a bamboo stick are the basic materials traditionally used for these rustic Warli paintings. This art form has come a long way from just using white paint on a red ochre background. Today, Warli can be found everywhere in a variety of bright colours for home décor as well as other artistic forms.

In fact, fashion designers like Anita Dongre and James Ferreira have started using Warli paintings in their designer collections as well.