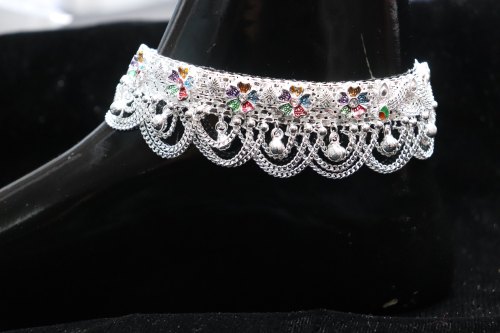 Worn around the ankle, the Anklets is also called ankle chain, ankle bracelet, Payal, Paijeb or Paizeb. It is the compact form of traditional accessory worn by Indian women, Ghoonghru.

This accessory finds its roots in the ancient Egyptian, Indian and Arab cultures where it was more of a status symbol for royal women. In Tamil literature, Silappatikaram or The Story of the Anklet is a popular first-century CE epic with profound detailing of anklets. The narrative of this epic poem revolves around a woman whose husband lost his life while trying to sell off one of her anklets.

Traditionally,  a gold anklet were worn by Kshatriyas only while other castes used silver anklets.

In Rajasthan, women from rural areas are usually seen wearing heavy silver ones. Odisha, on the other hand, boasts of different types of anklets known as Paunji Nupur. Padapadma is another type of anklet which covers the foot in its entirety. In ancient times men also wore an anklet..

Nowadays, simple silver ones  are worn by married women in India. For special occasions like weddings, a silver anklet adorned with meenakari and Kundan work are used too.