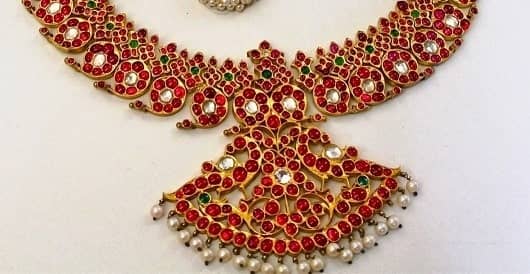 It is South Indian Temple jewellery or dance jewellery is of 2 kinds. One is made in pure gold and the other one is made with a mixture of 5 metals, known as Panchaloha  or pachadhatu. It is made up of gold, silver, Copper, zinc & iron. Tin or lead could replace zinc too. The idols in the South Indian temples are also made of this alloy. The alloy is mixed as per rules set out in the Shilpa Shastra or the sacred texts.

For instance, Temple jewellery made with solid gold pieces look heavy and grand. The pendants are typically large and have the deities of gods and goddesses such as Goddess Laxmi, Shiva, Parvathy, Radha and Krishna, or Ganesha the elephant god. They can be a long necklace or a short choker. This is available in Kirtilals Jewellery  and Sayar Jewellery

This kind of  jewellery  has rubies, kemp stones and pearls. The appearance is mostly in red colour. The jewellery used in Baratnatyam dance and Kuchipudi dance is commonly known as Temple jewellery.

For instance, the head adornment, also known as Maang Tikka also forms a part. The maang tikka comes in a set of two. For example ,one covers the forehead and the centre parting, while the other one has the image of the sun & the moon on either side of the parting. In addition, the ornaments for the hair, and the plait are all available.

The jumki and mattal (jumka and the chains from the earring) belongs to this type of   jewellery.

Finally, thick bangles  or Kada and bracelets complete the set.