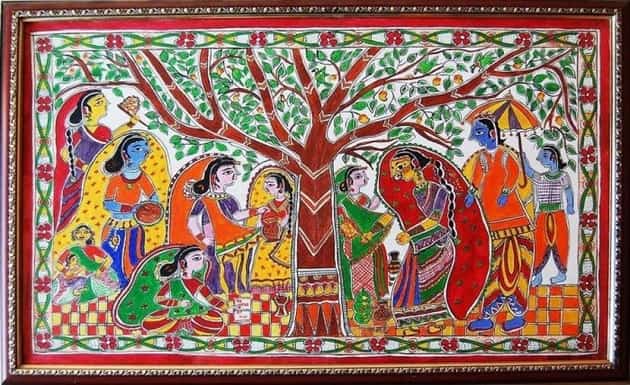 Madhubani painting or Mithila art is a 2500-year-old Indian art form having its origin in the Mithila region of Bihar and Nepal.

Madhubani paintings are said to have their origins during the period of Ramayana. It is believed that King Janaka had once expressed his desire to get Princess Sita’s wedding captured in the form of a painting. The result was what we call Madhubani painting today. This art form was practiced in the mud walls and floors of the homes in Bihar.

A massive earthquake hit Bihar in 1934, thus leading to the discovery of this art form. British Colonial officer William G. Archer happened to run into one of these paintings while he was looking into the damage caused by the earthquake in the interior walls of homes in Bihar.

How are Madhubani paintings made?

Artists use bright colors extracted from natural dyes in these paintings. They are created using fingers, twigs, matchsticks and even pen nibs in modern times. It is difficult to spot any blank space in these paintings. Rice paste is used to make outlines of the framework. The border is usually enhanced with geometric and floral patterns.

Women like Mahalaxmi, Dulari and Karpuri Devi (sister-in-law of known artist Mahasundari Devi) from Ranti village of Bihar have kept this traditional art form alive in more ways than one. They have not only taught other women about this alluring art form but also created awareness on how to take the legacy forward. At present, the Mithila museum of Japan showcases their splendid work of art.