Kausy M 1266 Views Add Comment on Melania Trump Stylishly Flaunted Her Indian Juttis. You Can Flaunt Them Too! 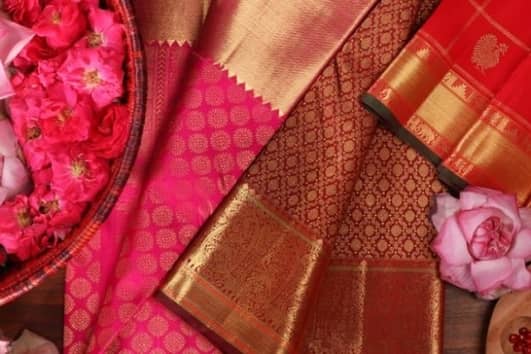 We were shopping in the Santa cruz market in Mumbai for a family friend’s wedding, when the salesman got us interested in Kanjivaram silk sarees. The rich texture and the attractive colors of the sarees were certainly exquisite. However, Kanjivaram sarees are  expensive, each costing more than Rs. 50000/piece.  Finally, we enquired about the origin of these sarees. They were woven in Kanchipuram near Chennai.

In addition, we wanted to buy sarees in bulk for several relatives for the wedding, as is customary in some Indian communities. Therefore, we decided to make a trip to Kanchipuram.

How to Reach Kanchipuram?

Kanchipuram is about 75 km and can be reached by road from Chennai in about 2 hours. There are several public transport buses that ply between Chennai and Kanchipuram. After that ,one  can hire an auto in the town.

Kanchipuram, known for its famous Kanjivaram silk sarees  silk sarees is known as the Varanasi of the South. Varanasi is the home of Banarsi sarees in North India.

In fact ,the city  is one of the seven most sacred cities of India, called Sapta Puri and is located on the banks of the Vegavathy river. Above all,  is a pilgrimage site for both Shaivites and Vaishnavites, the two branches of Hinduism. (WIKI). It has close to 100 temples. Similarly, it was a religious center for both Buddhism & Jainism as well. 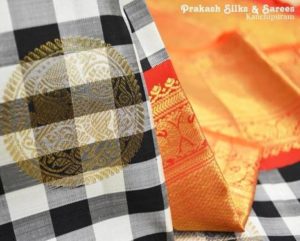 In a Kanjivaram silk saree, three shuttles are used. While the weaver works on the right side, his aide works on the left side shuttle. The border colors and designs are usually quite different from the body. If the pallu (the hanging end of the sari) has to be woven in a different shade, it is first separately woven and then delicately joined to the saree. The part where the body meets the pallu is often denoted by a zig zag line.

The Kanjivaram silk (or Kanchipuram silk) is heavier than normal silk; it can be hand washed and lasts for several years. The heavier the saree, the better the quality. The  Kanjiavarm silks sarees are expensive and authentic varieties are available only in select stores.

For instance, Kanjivaram silk sarees are noted for the use of traditional colors, for eg. Kili Pachai (parrot green), peacock blue and mango mustard are some of the popular colors. There are borders with distinct colors & designs in gold threads that are woven on to the sarees. The border styles have distinct names such as Temple borders, annapakshi (meaning birds) borders, butta borders and so on. Silver threads dipped in liquid gold are used on the borders. Authentic Kanjivaram silk sarees with gold zari borders are very expensive.

Although Kanchipuram is well known for its Kanjivaram silk sarees, it is also home to the cotton weaving industry and cotton sarees.

Therefore, the town of Kanjivaram has several shops that sell silk sarees and cotton sarees. We visited some of the following shops in Kanchipuram and picked some exquisitely beautiful sarees.

We also manged a visit to the following Temples in Kanchipuram.

Historically, the city has an unique distinction of being ruled by almost all the major dynasties, prominent among them being the Pallavas, the Pandiyas, the Chalukyas and the Rashtrakutas.

This temple is a Shakti Peetha.

The Goddess is seated in Padmasana (cross legged ,referred as a lotus pose ). She holds a sugarcane bow in her left upper arm, a lotus and parrot in her right upper arm. In her lower two arms she holds the divine chakras pasha (lasso), an ankusha (goad).

A moon like structure, called Chandraparai, is placed on her forehead.

In front of the deity, we can see the Sri Chakra installed by Adi Sankaracharya. Sri Yantra or Sri Chakra is a form of mystical diagram (yantra). It consists of nine interlocking triangles that surround a central point known as a bindu. These triangles represent the cosmos and human body.

Poojas(prayers) are first performed to SriChakra first and then to the deity.

It is significant to the Hindu sect of Shaivism as one of the temples associated with the five elements of nature- land, water, air, sky, fire., the Pancha Bhoota Stalas, and specifically to the element of earth, or Prithvi.

It is one of the largest temples with one of the largest gopurams ( towers) in India, standing 55 m tall. The present masonry structure was built during the Chola dynasty in the 9th century, while later expansions are attributed to Vijayanagar rulers.-WIKI

There is exquisite carving that can be found in the Temple. There are five sections that a devotee has to cross before he reaches the sanctum sanctorium. The hallway with a thousand pillars, which was built by the Vijayanagar kings, is found on the precinct after the gateway tower- WIKI

The presiding deity is Lord Shiva and the temple has been in existence even before 600 AD. Legend has it that Goddess Parvati, worshipped Lord Shiva under a mango tree for several years. The mango tree still exists in this temple. Each branch of the tree is said to bear a different variety of mango.

Varadharaja Perumal Temple or Hastagiri or Attiyuran is a Hindu temple dedicated to Lord Vishnu .It is one of the Divya Desams, the 108 temples of Vishnu believed to have been visited by the 12 poet saints, or Alwars. It is located in a suburb of Kanchipuram. It is known as the Vishnu Kanchi, that is home to many famous Vishnu temples.  Above all, One of the greatest Hindu scholars of  Visishta Advaita philosophy, Ramanuja, is believed to have resided in this temple.-WIKI

This temple is dedicated to Lord Vishnu who granted a boon to Brahma. The temple was named Varadaraja(bestower of boon) Perumal temple. The temple is large and has five courtyards, the deity of Lord Vishnu is in a standing posture.

The temple is also known for its golden lizards. Devotees climb a few steps to touch the golden lizaed ,thereby removing any negative influence from their lives. There is a panel in the temple where the two lizards are depicted in the roof of the temple. wiki

Also known as the Ooragathan temple is dedicated to Lord Vishnu. The deity is depicted as the Lord holding the right leg high representing the Vamana Avataar (the Lord’s incarnation as a dwarf) where he teaches a lesson to the demon king Bali.

The Kanchi Kailasanathar temple is the oldest structure in Kanchipuram. It is dedicated to the Lord Shiva, and is known for its historical importance. The temple was built from 685-705 AD by a Rajasimha (Narasimhavarman II) ruler of the Pallava Dynasty. The low-slung sandstone compound contains a large number of carvings, including many half-animal deities which were popular during the early Dravidian architectural period.  In addition, the structure contains 58 small shrines which are dedicated to various forms of Shiva. WIKI

Architecture in the Temple

However, this temple is known  for its intricate carvings and the temple is under the care of Archaeological Survey of India.  They are intact, trying to restore the temple to its original glory. It is interesting to note that there is a tunnel in this temple which is supposed to represent the passage of life. The entry is narrow and the devotees have to crawl through it to the exit, which is also narrow, thus representing birth and death.