manjula 875 Views Add Comment on Melania Trump Stylishly Flaunted Her Indian Juttis. You Can Flaunt Them Too! 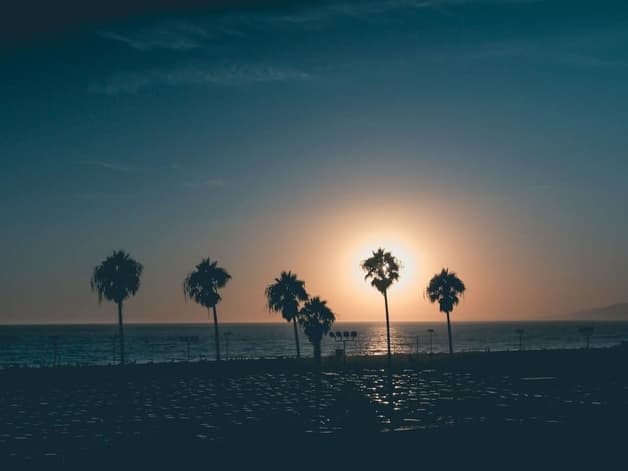 The Bay of Bengal is the largest bay in the world and the Marina Beach Chennai is a natural city beach and supposedly the second largest in the world.  Also, you can see fishermen dropping their nets  in the backdrop of the early morning sun. Further, playful children enjoy the waves coming ashore and retreating swiftly. For example ,they like  building sand castles in the white sands of the beach & later jumping on them to break them. Further, there are  people eating raw mangoes or sundal (hot chickpeas mixed with coconut, mangoes & a dash of lime) and enjoying the sandy beaches. These are some picture post cards views of the Marina Beach.

The Marina Beach Chennai is similar in beauty and size to the Copacabana Beach in Brazil and the beaches in Bali and the Bahamas.
The name was given by Monstuart Elphinstone Grant-Duff, the Governor of Madras from 1881-1886. Grant-Duff was instrumental in conceiving and converting what was a strip of mud to the present day beach with a beautiful promenade.  In other words ,the stretch which runs from Fort St. George in North Chennai to Besant Nagar in the South is now called the Marina. It is also known as the Santhome Beach and the Elliot’s Beach in certain sections.  For example, it is a major tourist attraction and houses many Government institutions and historic buildings along the coastline. (note: Chennai was earlier called Madras).

As a matter of fact, this memorial marks the beginning of the 13 km stretch of the beach.  For instance, The roundabout pathway surrounding the memorial was earlier called the “Cupid’s Bow”. As a matter of fact, this is where the high society met, conversed and romanced during the British era in early 19th century. Subsequently, a war memorial was constructed in memory of the allied soldiers who lost their lives during World War I and World War II. For example, One can see the armed forces paying homage to martyrs on the Army Day, Infantry Day, NCC Day, Navy Day and on Vijay Diwas.

Memorials for Leaders of Tamilnadu

The next landmark is Anna Square. In other words, it holds memorials of CN Annadurai, MG Ramachandran and Ms. J Jayalalitha, erstwhile Chief Ministers of the State .

The Triumph of Labour, one of the earliest statues to be built commemorated the meeting conducted by M. Singaravelar, a labour union leader, calling for recognition of workers rights. The statue was sculpted by Debi Prasad Roy Chowdhury, the then principal of the Government of Madras School of Arts and Crafts, what is today the Tamil Nadu Government College of Fine Arts. Interestingly , the watchman of the school was the model for the statue.

The current structure replaced the old one in 1977. It has an elevator and also houses the meteorological department. This is the fourth lighthouse to be built for the city, the eacheck rlier ones being built around Fort St. George and George Town in north Chennai. 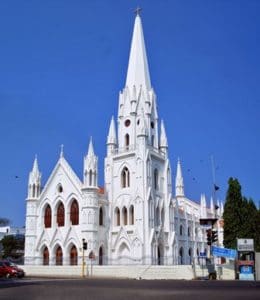 Close to the lighthouse is the St. Thomas Cathedral Basilica. This is one of the three known churches in the world built over the tomb of an apostle of Jesus. The story goes that, St. Thomas, one of the twelve disciples of Jesus, arrived in Kerala , in the south western border of India. Subsequently, he travelled eastwards and reached Mylapore in Chennai . He spent several years preaching at St. Thomas Mount on the outskirts of Chennai between AD 52 and AD 72. He was later martyred and his remains were buried in the location where the current Santhome Cathedral Basilica stands.

As a matter of fact, the present church built in Gothic style, has two towers. The smaller one points exactly to the location where the apostle was buried.  In addition, there is also a museum where the artefacts of the saint are preserved and also the spear which is said to have martyred him. The beach near the church is called the Santhome Beach. This beach is less crowded than the main Marina Beach.

This beach is the last section of what is called the Marina Beach. More importantly, the beach has a long walkway that attracts thousands of walkers and fitness enthusiasts during the mornings and evenings. In addition, this beach has two cenotaphs. One is the Broken Bridge and the other is the Karl Schmidt Memorial.
The Broken Bridge.

The bridge was built across the Adyar estuary, one of the many backwaters in Chennai, and was built by cutting across the Adyar river, to facilitate movement between Santhome Beach and Elliot’s beach. It is a popular spot for shooting Tamil movies.

Located in Elliots Beach, this is the only heritage structure on the beach. The memorial was built to commemorate the gallantry of K A J Schmidt who was drowned near this spot trying to save the life of a young British girl in 1930. The uneven base and sea water has damaged the memorial over the years.

Situated on the shores of Elliot’s Beach, the Ashtalakshmi ( refers to the 8 forms of Lakshmi) temple is dedicated to Lakshmi, known as the Goddess of Wealth. The eight forms of Lakshmi represent offspring, success, prosperity, wealth, courage, bravery, food, and knowledge. The temple has a tiered structure at four levels. One can step onto the sea shore from the temple and enjoy the sea breeze. The temple attracts a big crowd during festive seasons especially during Navrathri celebrations.

Finally, the last landmark is called the Church for Mother Mary, also known as “Our Lady of Health” “(Arogya Matha Church”) and supposed to possess healing powers. Sick patients offer candles shaped like the diseased body parts in this shrine and they offer gold or silver when they are completely healed. The shrine is very popular with persons of all faiths.

An international cricket stadium where cricket matches have been played between India and other world class teams.

Established in 1857, it is one of the oldest and premier universities in India. The University has six campuses across Chennai. The historical Senate House is situated in this premises. The University boasts of several world renowned scholars such as Nobel Laureate Sir C V Raman, the great mathematician Srinivas Ramanujam and Sarvepalli Radhakrishnan, and Dr. APJ Abdul Kalam – both ex Presidents of India.

Established in 1840, this college is one of the two presidency colleges in India.
Vivekananda House. This place was earlier known as the Ice House, where the British stored ice brought from the Great Lakes in North America. The house was later bought by a disciple of Swami Vivekananda and subsequently became a permanent centre for the missionary. The spherical structure now holds an exhibition center and library and conducts several activities of the Vivekananda Mission.

As a matter of fact, This  is the first women’s college of Chennai and the third in the country. For instance, this college was started in 1914. T In other  words, the college was named after the Queen of England and played a major role in women’s emancipation under Ms de La Hey, its first principal.

Built in 1839, this is one of the finest structures of Chennai. Built by Col. Francis Capper, it was his residence until the Madras Police took it over in 1859.
All India Radio. Another landmark on the Marina Beach. It was here in 1924 that the first broadcasting service was started in Chennai. The government run service moved to the current stately building in 1963. AIR also boasts of a very large music library.

Gateway to the South

The Marina Beach, beyond Elliot’s Beach, extends further along the East Coast Road and goes all the way to Mahabalipuram and further to Cuddalore, Pondicherry, Tuticorin and finally Kanyakumari, the southernmost tip of India. It is possible to travel by road all the way from Fort St. George in Chennai to Kanyakumari, alongside the coast of South India.

The Marina Beach is very close to City Centre Mall and the Mylapore Shopping market.