Kausy M 14687 Views Add Comment on Melania Trump Stylishly Flaunted Her Indian Juttis. You Can Flaunt Them Too! Kashmir has become synonymous with pashmina. The softness  & the colours of the Pashmina shawl make it a perennial favourite. It is ultra luxury. There is nothing more stylish & cozy in the winter months than wrapping yourself in one. As the poet Keats said A thing of beauty is a joy forever.

It is said that the first shals or shawls were used in Assyrian times. However, shawls were initially part of a male costume.

Apparently a Sufi poet named Sayyed Ali Hamdani came to Ladakh in Kashmir in the 14th Century. He found the  Kashmiri goat with soft wool and  requested  the Kashmiri king to start a shawl weaving industry. That was the beginning of the pashmina. 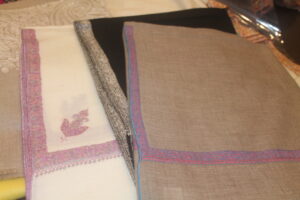 In fact, Kashmir was a vital area through which the wealth, knowledge, and crafts & textiles of ancient India passed on to the world.

In the late 18th C the pashmina  was introduced in Europe. Queen Victoria was a patron of this exotic shawl. The soft shawl from Kashmir came to be called cashmere.  The advent of the jacquard loom in Europe contributed to the decline of the Kashmiri shawl. Soon, there was mass production of similar shawls in Paisley in Scotland.

In other words, the main types of Kashmiri shawls are –

The Kanikar or Kani shawl which has motifs with imitations of nature, flora& fauna,

The Jamavr, which is a brocaded woolen shall with embroidery done all over the  shawl,

Finally, there is the  Dourukha (Persian, meaning “having two faces”). It is a double sided shawl which has identical patterns on both sides.

Well, if you thought that only Kashmir produced beautiful shawls in India, read about the Northeast, Gujarat & Andhra Pradesh. For instance, there are  Naga, Kullu, Dhabla and other interesting shawls from India. Above all, India has rich tradition of shawls.

The word Pashmina has been derived from the Persian word “Pashm which means soft gold. It is light ,soft and absolutely warm. The Pashmina wool is collected every spring from the Mountain goat “Chyangra” (Capra Hircus). It is  wool   found in the plains of Tibet & Ladakh. It is produced traditionally in looms placed in homes. In addition, each village has one or two weavers .A portable loom is set up outside every home. The yarn is left in its natural colour or dyed with vegetable dyes .While the wool is indeed from Ladakh, the spinning & weaving is done in  the Kashmir valley . The craftsmen are better skilled in Kashmir. As a matter of fact, the handloom weaving & embroidery are traditionally done by men. However, women have  been accepted  into this profession lately.

These shawls are created by the combined work of the naquash or pattern maker, the weaver & the raffoogar, who is a darner. Srinagar is best known for the finest pashmina shawls & scarves .While the plain pashmina shawl is beautiful in itself, simple  patterns add to the grandeur of the shawl.

Throughout history, kings, queens, and other nobility were the only ones who could afford to have shawls made from this ultra-luxurious fabric.

The Toosh, also from Kashmir, is from Shahtoosh, which is a Persian word for King of wools, is a fine type of wool made from the hair of the Tibetan antelope. The Shahtoosh shawl is now a banned item as the antelope, the cirri, is an endangered species.

Himachal Pradesh ,is another Indian State for colourful shawls. They are in stark contrast to the pashmina shawls. They are coarser and brighter. The craftsmen use something called the slit tapestry technique to weave the shawls. For instance, the Kulu shawl is identified by its colorful patterned borders on a plain body.

The wool is sourced locally from Merino & Angora. It is dyed in a fantastic range of colour. Further, the designs on the border are with multiple colours. The themes could be geometric or religious or on nature. Men typically graze the goats and women work on the looms in the Kullu valley.

Shawls blankets, socks and caps and traditional dresses are  all woven with the wool. The colourful Kullu caps will keep you warm in the winter months. People from this hilly State will proudly display their Kullu caps in winter. The tribal influence on the designs & colours are unmistakable.

The Naga shawl is also known as as Chaksheshang shawl. It  has the GI tag. The  shawls are characterized by distinctive bold patterns and are predominantly in red& black colours. For example, they are made from wool with striking weft patterns. The geometric shapes on a plain wool background are attractive. The rich tapestry  portrays the workmanship of the crafts people. Shawls ,skirts &blouses all have unique patterns that reflects their cultural heritage. The Angami naga shawls have an internationally acclaimed status. The women belonging to the Angami tribes are understood to be expert weavers.

In addition, the patterns displayed have a close connect with folk stories. The shawls of Nagaland tell stories of its clans, the 17 recognised Naga tribes & subtribes. Above all, each tribe has its own identity. The patterns on the shawls display their prowess in battle. Naga shawls are warm & closely woven.  However, black, white, dark blue, red and sometimes yellow are the predominant colors with white bands decorated with tiger, elephant or human head motifs.

Kalam, means a pen & kari which means work. Kalamkari work is popular in the Southern State of Andhar Pradesh. As wool is not popular in this warm State, shawls are made of cotton. The hand painted and block printed Kalam Kari work is very artistic & colourful. Firstly, the motifs are derrived from religious themes. Secondly, the colours used are all  based on natural dyes. This technique  combines resist printing  and hand painting. This is done at Peddana in Machilpatnam and in Sri Kalahasti. For example, the pen is used to trace the patterns. Hence the name kalamkari. Jaggery, charcoal, iron & vegetable dyes are used. The adoption of the Kalamkari painting in pashmina shawls in Kashmir is very unique & praiseworthy. They are aesthetically beautiful  and add to the  beauty of the pashmina.

The Kutch region in western Gujarat is a semi desert region and hence gets pretty cold at night. Dhabla shawls are woollen shawls  and are worn by the tribal communities. They could also be termed as a blankets and  are  made of wool from the sheep. The wool is from Merino sheep. They are primarily in white or black colours. The weft weaves in myraid colours along the border add  drama to the otherwise plain shawl. The embroidery & mirrorwork  also add value to the shawl. In addition, the work  is done by the women folk.The designs are inspired by the  sand dunes ,the Arabian Sea & local festivals.

Shawls worn by the Rabari community in Gujarat  are made of hand spun cotton & silk. They are interspersed with beautiful mirror  embroidery work. They are popular in the Mutwa or the Jat community. Chain stitches a variety of colours brings the plain shawl to life. Merino wool is used to weave the shawls in wool. However, plain shawls are embroidered and mirror worked  & tie & dye work is also done on the shawls. The shawls woven by this community have a black body with red  & gold borders. However, some shawls have stripes on the body. Black body with red and golden metallic threads represent these beautiful shawls.

Eri silk, also known as Endi or Errand is made from the cocoon of the eri worm. The adult silkworm leaves the cocoon before the cocoon is collected and processed into yarn. Further, the manufacturing process allows the pupae to develop into adults .It is hence also popularly known as non-violent silk. This silk is soft and warm and is used as shawls and quilts. They are in pleasing pastel colours with colourful embroidery work in the borders. This kind of silk is also found in China, Japan and Thailand in the rural households areas. For instance, traditional scarves known as Gamchas are woven in rural homes. They are primarily in pale cream colours with bright red & black embroidery on the borders.

The most exquisite of pashmina shawls are the Kani shawls. The Mughals brought this craft to the Kashmir valley. Kanihama is the place where this craft originated. There is a GI index indicated to this shawl. The Kani shawls are made on a hand loom.

Beautiful flowers and leaves are woven in an intricate pattern with the pashmina yarn. Above all, the beauty of these shawls is unimaginable. They are woven thread by thread similar to how a carpet is made. The patters are codified and  imparted by the Talim or instructor to the weavers. For instance, the Talim expertly guides the weaver in number of warp threads to be covered in a weft procedure. It takes approximately 6 to 18 months to complete one shawl. Kani weaving techniques are passed down from generation to generation. In addition, only the trained craftsmen are knowledgeable enough to weave Kani shawls the right way.

Therefore, it is worth taking a trip to these exotic places and explore the beautiful India shawls. Mother’s heirloom shawls hold a special place in the wardrobe. The techniques used to create a wool or pashmina shawl will stand the test of time. It is similar to weaving a carpet or creating a painting. Shawls are an investment. Both men & women can wear the shawl & style them for the perfect winter look.

Shawls from the Indian States are available in these Emporiums.