Jyoti 114 Views Add Comment on Melania Trump Stylishly Flaunted Her Indian Juttis. You Can Flaunt Them Too!

Our Prime Minister,Mr. Modi showcased the rich cultural heritage of India  at the G7 meeting. His office  & team had chosen specially crafted handicrafts from India to be gifted to the Heads of States of various countries. In another such recent showcasing of our heritage, 1000 women of Indian origin wore traditional Indian sarees to the Royal Ascot races.

It is remarkable that India’s rich cultural & ethnic diversity in textiles & handicrafts was showcased in such well publicized  global events.

The best cultural traditions of a country can be found in its handicrafts. One could almost say they provide a peek into the soul of a country, showcasing the artisans, the weavers and the traditions that they carry forward.

India’s multi layered cultural heritage provides a truly spectacular and awe-inspiring range of crafts.  Tribal communities across India create an amazing variety of handicrafts & textiles from available sources.Temples and historical monuments have preserved metalwork, granite & marble stone cravings and paintings.Weavers, jewellers, potters, carpenters, sculptors, painters, coppersmiths & blacksmiths, all continue to work on their prodigious skills & carry on their noble professions even today. Skills are passed down generations. Conquerors and occupiers of the land  also introduced & contributed to craftsmanship development in the country.

Here’s just a tiny sampling of what India has to offer.  Visit  https://www.shopkhoj.com/indian-handicrafts/ to learn more about the many handicrafts & the shops from where to to buy them .

Let us learn about  some of these ancient crafts.

The Dhokra Art is very distinct. The Dhokra Dhamar tribes practise this craft. In fact, they are resident in the States of West Bengal & Orissa. They are metalsmiths by profession, who  have been working in this art form for more than  500 years.

Firstly, clay molds of objects  are prepared with intricate designs. Further, a molten metal  which is an alloy of copper & bronze is poured into the mold. This creates the desired shapeof the object. As a matter of fact, human & animal figures are  fused /merged to create the unique forms & figures. The sizes are quite small. Individual pieces or processions of forms are also crafted as is seen in the picture below. Mr. Modi presented The Nandi, an image of a bull, the mascot of Lord Shiva on this occasion. 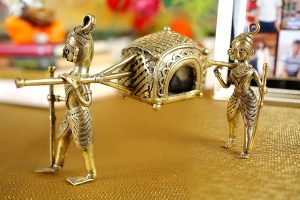 Firstly, the design is drawn on plain marble. Further, skilled artisans work with tools to make the grooves on the marble. Subsequently, semi-precious stones and mirrors are cut and polished to fit the exact design. Finally, with great accuracy & meticulousness the craftsmen places the marble pieces in the grooves. For instance, one can find several panels of mirror inlay work in the world-famous Taj Mahal .

This art work is now being replicated on table tops, colourful boxes, decorative plates, bowls & so on. Agra is easily the most famous place for inlaid work in marble. 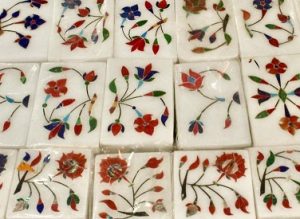 Plants & insects create lacquer. Certain kinds of trees such as palas, (https://wellcomecollection.org/works/mm7j5b5r ), Kusum (https://en.wikipedia.org/wiki/Schleichera), and  a few other trees  are particularly useful in producing  a kind of gum, resin, wax & dye.  The liquid is made from the sap of the tree .Lacqer is  made from the liquid.

The liquid  dries fast on wood, metal & papier. Lacquer products are predominantly hand made. They are subsequently hand painted in stunning colors. Lac bangles are particularly famous in the State of RajasthanLacquer is used to make boxes, plates & other decorative products.It is very popular in South  East Asia.

Mr.Modi presented a  Ramyana set ,with Lord Ram&  Sita,sitting in the durbar . 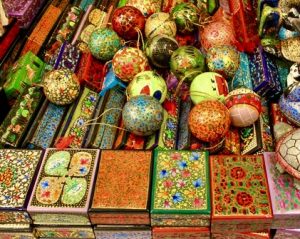 The  Kashmiri & Jaipur Mughal carpets have a very central Indian ethos & aesthetic. After all, Sultan Zain ul Abedin  introduced  the carpets in the 15th century, in Kashmir. The most interesting part of carpet weaving is the “taleem” or the code. The entire weaving instructions are codified. Even colors are indicated by codes . The master weaver repeats his instructions to his weavers in a sing song manner .

The Kashmiri silk carpets use silk thread in the warp & the weft. Two horizontal beams are used to  stretch the threads. The loops with the weft thread are known as knots. The higher the  number of knots, the more intricate is the design &price 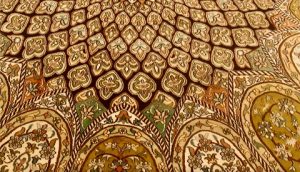 The Gulabi Meenakari work uses the pink colour predominantly. It is popular in Varanasi. Mr.Modi presented cufflinks & brooch in Meenakari work to the US President,Mr. Biden. 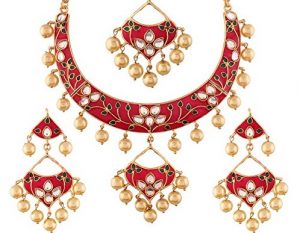 “Gulabi Meenakari is a GI-tagged  craft of Varanasi in Uttar Pradesh.

Sarees at the Royal Ascot

The Royal Ascot races  were held on the 16th of June  2022in the UK .This year was the Platinum jubilee year, when the Queen completed 70 years as the reigning monarch of England.

Ascot races have a royal past . It is said that Queen Anne started the tradition of horse racing in 1711. 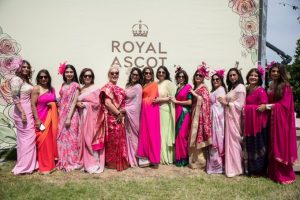 There is so much tradition in dressing, seating & the Royal procession too.

Firstly, there is a royal procession when the Queen  & the royal party arrive in  horse drawn landaus at the race course.

For instance, traditionally, men wore long tails & hats & women were fashionably dressed  in stylish garments, hats & fascinators. As a matter of fact, at the Ascot  horse racing event, people come to watch the horses &  the dresses too. Further, the jockeys wear the same colour outfits as the owners. The duty guards are all dressed in green velvet.

That being the history, it is a matter of great pride for India that more than 1000 Indian women wore traditional Indian sarees this year. There were two reasons for this. Firstly, this was planned to commemorate the platinum jubilee of Queen Elizabeth.  Hence there were sarees with the Queen’s face, the union Jack and several important landmarks as well.

Secondly, it was to showcase India’s rich culture .It was to promote Indian weavers.

7 Best Indian Handicrafts to Buy When You Visit India