Kausy M 1519 Views Add Comment on Melania Trump Stylishly Flaunted Her Indian Juttis. You Can Flaunt Them Too! 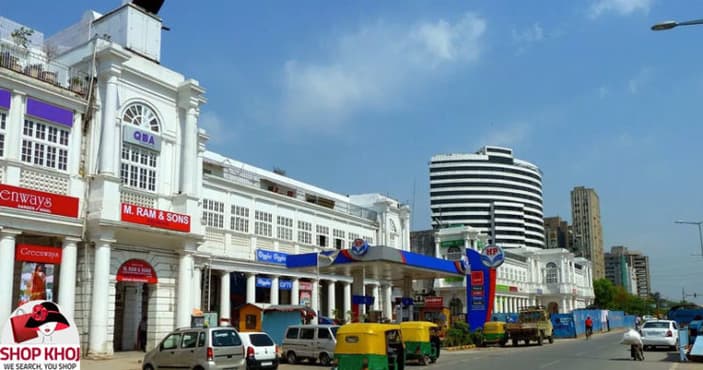 Firstly, CP, as Connaught Place  is popularly known was built in 1931. It is  as part of a grand design for New Delhi by British architect Sir Edward Lutyens. Connaught Place  with its spectacular white columns and circular structure, soon became the business and commercial hub of New Delhi. Above all, it is still the heart of New Delhi – offering the best of shops and food, old and new.

Delhi is one of those cities where nothing is isolated except the modern Delhi shopping malls. The authentic shopping districts are in the heart of the city. Delhi shopping Markets  are  surrounded by the grand Mughal domes  and  lovely British architecture. Further, they are also flanked by classic hotels and legendary  old restaurants.

To give you the true Delhi shopping experience, we have created simple walking tour that will take you to the best shops in Delhi, the best places to eat in Delhi while you shop, and also let you catch a glimpse of the historic splendour of the capital city of India.

For instance, the center of New Delhi can easily be reached from any place in the city. You can go via taxi, bus, metro or local transport. The easiest route would be to hop onto the metro and get off at Rajiv Chowk station. This station, located below  Connaught Place (CP) is also where all the metro lines of New Delhi converge . Hence, you will find it on every Metro line and can get connections to anywhere in the city from here.

Connaught Place is circular and can easily be covered on foot. It also has about 7 different  radial roads leading out of it.  They are  similar to  spikes on a wheel in a hub and spoke model. This leads  to various parts of the city.  As a matter of fact, the entire  Connaught Place (CP) Area, with its roads, lanes and by-lanes is an exotic labyrinth.  There are  several shops tucked into nooks and corners.  Delicious old eating joints  are very enjoyable .  Exquisite Indian handicrafts and traditional clothes and jewellery shops are a major attraction here.

The India Gate is dedicated to the Indian soldiers who died in WW 1.  As a matter of fact ,you are free to walk all the way up the hill, to the gates of the Rashtrapathi Bhavan (Presidential Palace). This is flanked by the North and South Block ,where the Government ministries are located. A large oval shaped building to the right of the hill is The Indian Parliament. The new central Vista is being constructed in that space right now.

For instance, if you would like to visit a few other monuments instead of India Gate- you could visit the Jantar Mantar – located on Parliament Street, just off  Connaught Place (CP).  It is one of the oldest observatories built in the city. Open all days – Sunrise to Sunset, Entry Fee: Rs. 5 (Indians), Rs. 100 (foreigners) Photography Charges: Nil ( Rs 25 for video filming).

Else you could just walk down a few meters from the State Emporia on Baba Kharak Singh Marg and visit one of the famous Sikh places of worship . It is the Gurudwara Bangla Sahib- which is  a grand gold and marble structure . As a  matter of fact , it was originally built in the 1780’s.

Finally, end your Connaught Place (CP) Delhi Shopping and Food tour with an ice-cream soda or Hot Chocolate Fudge at Nirula’s restaurant . It is Delhi’s famous ice-cream parlor  and is located on the outer circle of C.P. Or  else you could grab a Frappuccino at New Delhi’s first Starbucks, also right here in the heart of C.P!