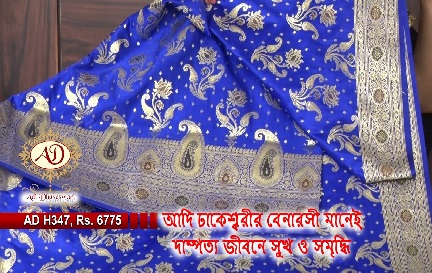 Adi Dhakeswari Bastralaya is an old and trusted name for saris in Kolkata. The main store is located in Gariahat while another  five storied store is located nearby in Triangular Park. The store is spacious with 2 floors. They have an enviable collection of saris of Banarasi, South Indian silk, Dhakai, Taant and Jamdani make and many other varieties from across India. They also have nontraditional saris in  chanderi Kora silk georgette, chiffon and crepe. Recently, they have introduced formal and semi-formal lehengas (long skirts) for brides.

The focus is on bridal wear sarees in this shop.

Adi Dhakeswari Bastralaya is one of the best saree shops in Kolkata.

Anjali Jewellers was set up in 1992 by Ananya Chowdhury. Starting from a single showroom in Golpark, they now have five showrooms including the ones at Salt Lake, Behala and Sova Bazar. Gold, diamond, silver and costume jewellery are available here. They have trendy lightweight jewellery with gems and precious stones. Some actresses have modeled their jewellery at Fashion shows and exhibitions. Their efforts have been recognized with several awards .They exhibit and sell jewellery at North American Bengali conferences and have represented West Bengal in the Asia Week in Milan, Italy.

Kolhapuri Centre offers a unique collection of ethnic Indian footwear. The store derives its name from Kolhapur, in Maharashtra. It was founded by Sashibhusan Das in 1962 . Their first retail store was established in the 1990s. Kolhapuri Centre has chappals, jooties( Rajasthani boots) and leather covered shoes ,bags and belts. Kolhapuri Centre has products for men , women and even children. Quite unlike other shoe stores, Kolhapuri Centre houses only Indian traditional footwear and accessories. Each piece is assembled individually and is hence unique. Though there are other stores that carry traditional Indian footwear, none of them exclusively trade in shoes. The quality of the stitching and leather is also very good. Shoes tend to last years, even after regular use. It is also the only known store in Kolkata with a vast range of party, marriage and special occasion ethnic footwear collections for men. The store is a favorite among Bengalis and the leather and design quality of the jooties, nagrais and chappals make them a must buy during festive season. Hence ,Kolhapuri Centre is a popular destination during the marriage season, Durga Puja and Id . They also aim to keep prices at affordable range without compromising the quality of products. Chappals and jooties range from Rs 300 to Rs 700/-.per pair. Belts and accessories are also in the range of a few hundreds per piece. Hindustan Park, not being the only branch, it is however the busiest and one of the most well known branches, owing to its prime location. Other known branches of Kolapuri are at : Ballygunge Phari 56/2A Gariahat Road, Kolkata 700019 Hathibagan Branch 76/1, Bidhan Sarani, Kolkata-700006 College Street 4 No. Keshab Chandra Sen Street, Kolkata-700009 Mudali 198/A S P Mukherjee Road, Kolkata – 700026 Kankurgachi 190B Maniktala Main Road, Kolkata-700054 Lake Market Branch 79A, Rashbehari Avenue, Kolkata- 700026 Golpark 28/1C Gariahat Road, Kolkata -700029 Salimpur 32/2/1 Gariahat Road Kolkata 700031

Kalika is a shop for sarees and dress materials . On display is a wide selection of sarees ,ranging from cotton to Assamese silk, Dhakai, Balucheri , Chanderi , Ghicha, Kosha, and Bhagalpuri silk . The prices range from Rs.500/piece for a cotton sari to Rs 10000 to Rs 20000 per piece for an exquisite tussar silk saree . The store also has on display a wide selection of plain, printed and zari bordered chiffon sarees at Rs.650 /piece . They also stock a few shawls, materials for blouses and fabrics for salwar kameez. Kalika is a tiny shop opposite to Triangular Park. .