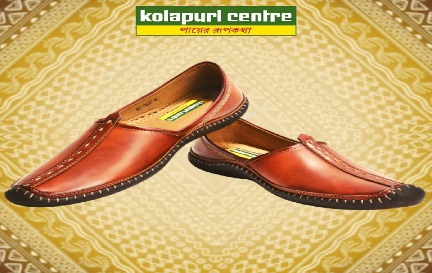 Kolhapuri Center offers a unique collection of ethnic Indian footwear. The store derives its name from Kolhapur, in Maharashtra. It was founded by Sashibhusan Das in 1962. Their first retail store was established in the 1990s. Kolhapuri Centre has chappals, jooties( Rajasthani boots) and leather covered shoes, bags and belts. Kolhapuri Centre has products for men, women and even children. Quite unlike other shoe stores, Kolhapuri Centre houses only Indian traditional footwear and accessories. Each piece is assembled individually and is hence unique.

Though there are other stores that carry traditional Indian footwear, none of them exclusively trade in shoes. The quality of the stitching and leather is also very good at Kolhapuri Center. Shoes tend to last years, even after regular use. It is also the only known store in Kolkata with a vast range of party, marriage and special occasion ethnic footwear collections for men. The store is a favorite among Bengalis and the leather and design quality of the juties, nagrais and chappals make them a must buy during festive season. Hence, Kolhapuri Centre is a popular destination during the marriage season, Durga Puja and Id. They also aim to keep prices at affordable range without compromising the quality of products.

Belts and accessories are also in the range of a few hundreds per piece.

Hindustan Park, not being the only branch, it is however the busiest and one of the most well known branches, owing to its prime location.
Other known branches of Kolhapuri Center are at:

Priya Gopal Bishoyi is a favourite destination when it comes to saree shopping for any occasion. They have two outlets. One in Burrabazar (the wholesale market of Kolkata)and the other in Triangular Park, near Gariahat. A whole range of sarees from Banarsi silks, South silks, Taant, (woven from cotton threads) Ikkat ,Baluchari and Bomkai are available […]

The location of Mabesha, in the nerve center of Bengali shopping area is unbeatable. There is a quiet quality and the reputation that has been built up over the last 15 years speaks volumes. Classic sarees in Cotton, Benarsi Silk, Matka silk , Tant sarees from Phulia , reflecting Bengali style are some of the choices that you will find here. Stylish range of light weight benarsi bridal sarees is a big draw . Mabesha is well known for hand painting of mythological figures in silk sarees as well as hand embroidery. The prices are reasonable and you will definitely want to buy more than one to add to your collection.

RMCA Basak, is a 30+ year old store known for Bengal handloom saris. A trusted name in Kolkata, they have a wide range of saris. They have now extended their product line to include salwar kameez, blouse pieces, supernet saris, kota saris and chiffons. The prices start from Rs 300 and go up to Rs 10,000 or more per piece. They offer a wide range of designer saris with beautiful embroidery.

M P Jewellers is an old and trusted name in jewellery. Fine aesthetics and authentic jewellery are the hallmark of this jewellery design house. Gold sets (necklaces and earrings) in contemporary designs with enamel work or with antique finish are very well known here. Trendy bracelets in platinum attract the sophisticated customer. They have a huge collection of bracelets, necklaces and rings with diamonds and other gem stones. M P Jewellers have 4-5 showrooms in Kolkata with many more all over North India.