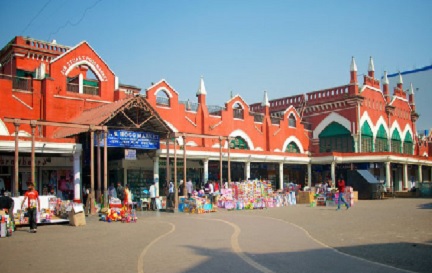 First of All, New Market has the honour of being Kolkata’s oldest and...Read More

Silver Arts is a well-known shop and has 3 outlets in New Market. The collection includes necklaces, chains, earrings, bracelets and bangles that are designed in silver with semi precious gemstones. Each shop has a different collection of items. You can also shop around for interesting gift items.

Heritage is a shop for handcrafted fine silver jewellery in very stylish and contemporary designs. Silver is paired with precious/semi precious stones like rubies, jade, sapphire and coral to be made into interesting and colorful necklaces, bracelets, earrings and rings. Conch shells of unique shapes and sizes are also available in the store.

Chambalama is one of the oldest silver jewellery shops in Kolkata and has been in business for more than 50 years. The jewellery is distinctly Tibetan and North Eastern in design. There is more than jewellery in this shop though .One can spend hours browsing through the clutter of copper, brass and silver artifacts, the trays of earrings, rings and bracelets, the strings of beads and chunky pendants. Chetenyangjom Sherpa first came to Calcutta as a girl of about 13 from the Darjeeling hills to trade in Tibetan curios and stayed on to open Chamba Lama. The name is derived from Gyawa Chamba, which means the coming Buddha, the Buddha of Maitreyi (friendship). This is one of the best silver jewellery shops in Kolkata.

Lakshmi is a popular sari shop located at Kolkata’s very own Hogg Market, which caters mainly to the Non-Bengali segment of the society. Their stock primarily comprises of chiffon, crepe, georgette and silk materials having heavy zari/zardosi work. They also have an amazing stock of designer blouses and clutches, mainly for party wear and wedding purposes.

Kashmir Gift House is a third generation 113 year old store and is well known for its high quality authentic Kashmir Pashmina showpieces. Authentic Kashmir items are hard to find in Kolkata and if one wants to look for all things Kashmir in one place, this is the store to go to. The store specializes in Pashmina Jamawar shawls, Pashmina stoles, designer sweaters and Phirans. They also sell dress material for salwar kameez. The other speciality of the store is furniture made from sheesham, rosewood and walnut wood as well as brass showpieces with intricate Meena artwork such as flower vases, large decorative kettles and brass antique chests. The embroidery work on the Pashmina or Phirans is done by hand. So are the showpiece carvings and Meena work. The cost of the Pashmina items range from Rs 5000 to Rs 10000 a piece. A walnut wooden dining table would cost Rs 65000 a piece. They also stock glass bangles with gold work as well as leather bags. The shop assistants are very friendly and will be able to provide you information on the origin of the products, should you be interested. Also, every wooden item that you buy will be polished just before purchase , so that it stays fresh for years to come.

Sanskriti began its journey way back in the year 1993. They focused on traditional fabrics like silk, tussar, mulmul, khadi ,handloom and cotton and created sarees with ethnic Indian designs. The designs are done using different types of embroidery like zari booti, kantha stitch and phulkari and prints such as block prints and khesh. Sarees with reverse kantha stitch patterns are very uncommon but these are s available in the Sanskriti boutique shop. They also stock casual wear skirts and tops.

Sunshine is ‘the’ place to shop for clothes and accessories which are very popular with the Kolkata youth. Sunshine is popular for its comfortable and stylish Indo western dresses priced at very reasonable rates. The applique worked, block printed or painted harem pants and palazzo pants , wrap-around skirts, kurtis made from a variety of cotton fabrics and stylish bandanas are the signature products of Sunshine. The bead embellished jhola bags and batuas, accessories made of animal bones , metal accessories & trinkets with religious emblems , post cards, wall hangings and notebooks are also some of the varied and assorted items available in this Kolkata shop. The relaxed atmosphere and the masala chai( tea) that is served to clients add a personal touch to the Kolkata shopping experienece .

First of All, New Market has the honour of being Kolkata’s oldest and most well known market. Adjacent to New Market is Hogg Market. The British built it in 1874. It started off  being known as the Sir Stuart Hogg Market, named in honour of the then Commissioner.

This Kolkata Market is still often fondly referred to as Hogg’s Market. Its landmark clock tower, red brick structure and the sprawling maze of nearly 2000 stalls below one roof, right in the heart of Kolkata is a sight to behold. It is most certainly one of the crowded shopping markets in Kolkata.

New Market offers everything from apparel, jewellery, footwear, handicrafts, and everything else at quite reasonable prices.There are several shops for salwar kameez, lehengas, nightwear and sandals. Further,  the Hogg Market specialises in home appliances and toys.

Hence, both the markets are very popular in Chowringee, Kolkata. They are covered markets. However, they are not air-conditioned. In addition, the air-conditioned Shreeram Arcade market is also closeby.

Shreeram Arcade has shops for bridal lehengas, along with those for jeans, women’s apparel and footwear.

In its early days, New Market had a distinctly upper class British aura about it. Over a period of time though, it has evolved into a market for the common man. It is crowded, hot and chaotic, bustling with shoppers and sellers bargaining for deals at all times. Stalls are grouped according to the type of goods they sell. However, finding your way around can still be a navigational nightmare.

If you are on the lookout for special products in the market, you should not turn down the services of one of the many guides (known as coolies) that congregate around the market entrances. They live and breathe the market. These guides can certainly lead you to the best goods for the best price.

Vegetarians are advised to avoid the slaughterhouse in the meat section, in the division between New Market’s east and west wings.

Although New Market is only open until 8pm, the surrounding area comes alive only after the stalls have closed. Under the glow of lights with people eating, drinking chai (tea), and chatting, this Kolkata Market comes to life. It is well worth hanging around to soak up the vivid atmosphere at New Market.

Another attraction is the famous Jewish confectioner Nahoum’s. The shop has been the pride of Kolkata since 1902. In 1916, Nahoum’s moved to its present location in the New Market. The original owner’s grandson, David Nahoum, runs it today. It is one of the oldest and premier confectioneries in the country.

Adjacent to it is the Chhamba Lama, an ethnic Tibetan shop selling variety of items like jewelry and artifacts.