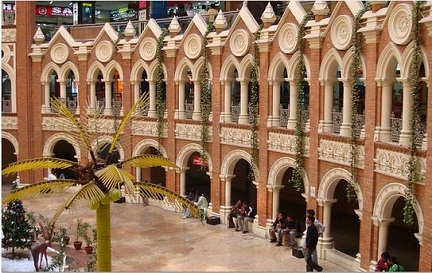 Look Out For :- Kashmiri Carpets

What’s Interesting :- Spencer Plaza was built in the year 1863–1864 by Charles Durant and J. W. Spencer in Anna Salai

Firstly, Spencer Plaza was built in the year 1863–1864 by Charles Durant and J. W. Spencer in Anna Salai, then known as Mount Road, in the Madras Presidency. (WIKI). It was a British era building  that was the talk of the town.It was a departmental store which had several individual stores and had a spectacular façade. It was a landmark building in Chennai  spread over 125, 000 sq. ft. The Hotel Connemara, was right next to the Spencers Plaza. It was a very happening place with the hi profile crowd from the hotel & the college going crowd frequenting the Chennai shopping Mall. It was the best in class.

It was reconstructed in 1985 after a fire damaged the original building on this site.However, the new building does not have the classic look of the original Mall.

It is fully air conditioned and has many  ethnic stores. This used to be one of the favorite places for the locals to shop and was always crowded.Many local residents feel nostalgic. After all the original building was an iconic landmark in Chennai,being the oldest shopping mall in India. With the opening of newer and bigger Chennai malls, Spencers has lost some of its glamour and is no longer such as sought after mall anymore.

Not all the stores are fully occupied. However, tourists and local residents come to this mall to pick up some beautiful Kashmiri Carpets here.

Know about the best shops in Spencer Plaza Chennai. Read our review before you visit Chennai shopping malls.

The Forum Vijaya Mall is in Vadapalani in Chennai. In fact, it is a quick walk from the Vadapalani metro station and bus stop.  This mall is not as big and spacious as the Phoenix Mall or the Express Avenue Mall. However, it is large, with 4 floors of shopping dining & movie options. Basement The Spar Hypermarket in the basement […]

his is a mini Chennai Shopping Mall right in the heart of the city with ample parking space .It is one of the earlier malls that came up before the advent of the bigger malls .It is a quiet mall. There is Art Karat, Ayesha & Asha Kamal Modi jewellery store . All these stores stock costume jewellery and imitation jewelry . Art Karat has traditional gold & polki jewelry in plated gold, Ayesha stocks silver jewelry for the teenage crowd and Asha Kamal stocks sterling silver and gold plated jewellery. Then there is Hi Design the branded leather and bag shop . Their sister concern Casablanca sells various accessories such as belts and breifcases. Calonge is a footwear &bag brand that has a shop in the ground floor. Ritu Kumar , who is a very well known designer has an outlet on the first floor for Indian wear & bridal wear garments .Archies’ Gallery has a rather large shop here .Archies is a card & gift shop . Ther are some food options like Marry Brown on the ground Floor (especially their veg nuggets) & Cafe Coffee Day. Know about the best shops in Isphani Center. Read our review before you visit Chennai shopping malls.

The Phoenix Shopping Mall in Chennai is strategically located in the southern part of Chennai right behind the Grand Chola Hotel. This hotel is the third largest in India. There are not many shopping markets in Chennai in this area and the mall hence attracts a lot of visitors. This is a very spacious & well laid out mall and has made shopping in Chennai a pleasant experience. Several international and domestic retail stores are housed here, in addition to restaurants and entertainment zones. Anchor stores are Lifestyle, Globus, Marks and Spencers and Big Bazar. Renowned cosmetics brands such as MAC Cosmetics, The Body Shop, Clinique and Estee Lauder have independent shops in this mall. Adidas, Clarks, Charles and Keith and Steve Madden are some of the well-known brands for footwear. Da Milano, iNC5, & GAP,Mango, Promod, Marks and Spencers , Zara Guess and Timberland ,Aeropostale ,are among the well known international stores in this Chennai shopping Mall . Brooks Brothers is a popular store for men . Fab India, Global Desi & BIBA are popular for Indian wear dresses. Kushals, Ayeshs, Claire and Utharika are imitation jewelery shops in this Chennai mall. They have an extensive range. Chumbak is a gift store & kids store with bright colourful products . Hamleys the kids store is here too as in Mother Care. Hard Rock Café and Nandos offer very different dining experiences as compared to Rajdhani, Moti Mahal and numerous other coffee shops including starbucks. Entertainment is in the form of a kids play area and the cinema.The Phoenix Mall is much less crowded than the Express Avenue Mall that is located in Whites Road in Royapettah. It is also much larger and offers a very relaxed ambience. Chennai shopping has become exciting after the opening of these spacious malls. Know about the best shops in Phoenix Market City, Chennai. Read our review before you visit Chennai shopping malls.

xpress Avenue Mall is a popular Chennai Mall . It is close to Mount Road ,which is home to some of the best Chennai shops . With the opening of the Express Avenue Mall in Chennai, Chennai shopping has seen a fundemental shift towards big brands and big labels . Marks &Spencer , Charles Keith, Benetton, levis,Wrangler, Aldo, Catwalk , Hi design, Vero Moda, Forever 21,Forever New,H&M, Nautica,Tommy Hillfiger, Benetton, Hamleys, Burberry, Clarks, Crocs,Claires, Addidas, Nike, Puma,Rado are just a few of the international brands that are available here . The best cosmetics & personal products such as MAC & Parco, Sephora and Bobby Brown have a presence in the shopping Mall. Satya Paul , Lifestyle, Biba ,Holi, Metro, Regal, Florsheim ,Titan & BIBA are some Indian brands. Typically ,the shops in Chennai were on the main roads in the city. Shopping meant parking on the road & visiting a single shop. Congregating in a shopping mall was unheard of . The opening of the Express Avenue Mall a few years ago has changed the Chennai shopping experience a great deal . As in all malls there are plenty of restaurants & coffee shops . Pizza Hut, KFC, Mc Donalds ,Starbucks & Café coffee day are all there . People young & old visit this mall for entertainment purposes too. They enjoy sitting in the coffee shop ,having a meal with the family or enjoying the cinemas or go shopping . It is a days outing for many in Chennai shoppers. There is sufficient Parking. Know about the best shops in Express Avenue Mall. Read our review before you visit Chennai shopping malls.